Early in the evening when time allows, I enjoy walking around the Aberdeen neighborhood near my house.  By 5 or 6 pm most nights, adults are sitting outside their homes, listening to the radio, chatting, eating a meal or otherwise passing the time.   Women are often gathered together plaiting each other’s hair. Wherever I walk,   I always encounter  children playing in the dusty streets, and youth engaged in sports.

Brothers at the beach.

Imagine a world not dominated by TV, video games, electronic gadgets and  expensive toys and you can begin to imagine life in Sierra Leone.   Imagine such a world  and you might imagine a world shaped by an appreciation of both simple pleasures and simple treasures.

Draughts is a commonly played board game.

Throughout Sierra Leone, playing and discussing football (soccer) is probably the dominant leisure time activity.  In Freetown,  every neighborhood has a football pitch,  and there are games at the beach every day of the week.  Although daily life here is physically demanding, physical fitness is nonetheless a preoccupation for many young people.   On Sunday mornings in Freetown the streets are filled with people out for a run, and I am seeing serious cyclists more and more on the outlying roads.  Basketball and volleyball are also popular in some circles. 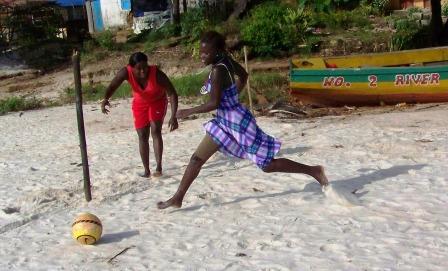 I don't often see girls or women playing football, perhaps because they are busy cooking and caring for the home! This game was part of a recent Lutheran Youth Organization retreat.

I have particularly enjoyed watching children at play in Sierra Leone, and seeing their creativity and skill.

These kids are playing a version of football using batteries, cigarrette boxes, and bottle caps. 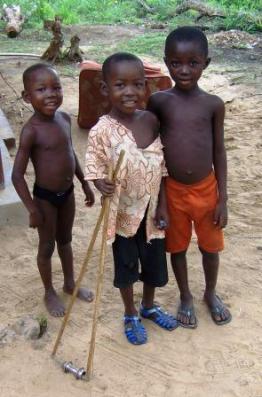 Home made toy: sticks and metal. 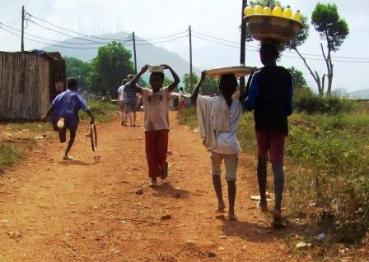 This is a typical street scene: children carrying things. Here too is , another common homemade toy: a wheel and stick , a toy known as "gig" in krio and mende.. I am told that mothers will sometimes send their sons to the market with this "toy because that way, the boy has to run straight down the road and can't dawdle or get distracted.

This particular boy was extremely quick and very proficient. Kids compete to see who is fastest and most skilled at moving the wheel.

This entry was posted in Sierra Leone general and tagged games, sports. Bookmark the permalink.

3 responses to “Fun and Games”